Lucero was born in El Salvador during the time of the civil war when children were trained to kill during the wars in her country. For this reason, Lucero has a passion for stopping the misuse and exploitation of children and youth and sentencing them as adults for the ways they survive the pressures and realities they face. Lucero was charged as an adult at the age of 17 and released from prison at the age of 22.

As a young mother, she believes that young women and girls need to lead the change they need in their lives, families and communities. For Lucero, it is important to change the narrative about our lives by telling our own stories as cis and trans women and girls, trans men and young men, and gender-expansive people. She believes that the young women YWFC works with should have agency over their own lives and the role of self-determination coaches is to support them in defining what self-sufficiency means to them. Lucero meets women where they are at and works with them over time to deepen their understanding of themselves and what justice looks like and means for them, their children and their communities. Lucero has been with YWFC since 2015. 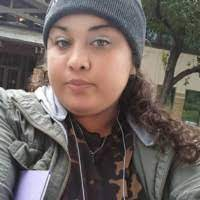